Explanations on the Well-founded of A9 TECHNOLOGY®
In 1988, as seen in the history, A9 TECHNOLOGY® is born, simply by starting from the following observation: The vehicles which roll wear out and those which do not roll (with the prolonged storage) are damaged.

For one simple reason: the oil acidifies & loses its qualities very quickly (already from the first days, even a barrel of oil, once opened, begins to see its oil acidify).

When rolling, this acidity is discharged into the atmosphere. When not rolling, the acidity remains in the engine & slowly begins to deteriorate the metal masses. How does such a phenomenon occur?

​
Let's take the following diagram in which 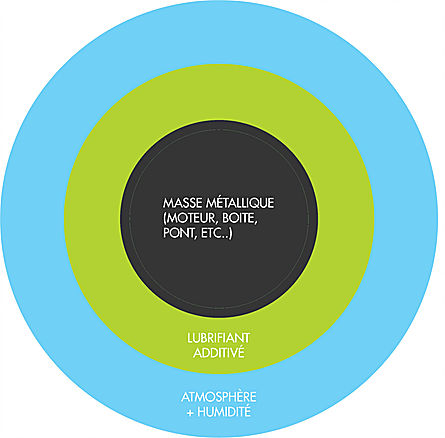 Atmosphere and humidity
Standard Multigrade Lubricant
Metal mass of an engine
In the case of any mechanical kinematic chain (engine, transmission, hydraulic circuit, etc.), these three elements are present.

The oil is always in contact with the metal in an atmosphere containing more or less moisture.

RESULT : An acid medium is gradually obtained. This acidity is the first cause of deterioration that will record the mechanics over time.
It is from this observation that the A9 TECHNOLOGY® was born.
To remove this acidity, it would be necessary to isolate one of the three elements mentioned above.
It is impossible to remove the lubricant. It has an obvious role of lubrication but also, it allows the internal cooling of the engine & also ensures its cleaning by its detergency. It should be remembered that the lubricant is standardized and that if we touch it, we lose all the guarantees offered by the manufacturers.
In other words, when adding a commercial additive, the standardized lubricant is modified and the consequences that follow are the following:
- Instant loss of the manufacturer's warranty,
- Immediate modification of the behaviour of the chain of the dopes of the oil (which is also called the Process), which will have an impact on the reliability & longevity of the mechanics,
- Hand in the pocket of the user to make repairs as no more insurance comes into play in case of damage.
It is unthinkable to easily change the structure of the atmosphere or even to remove it. It is essential to combustion for engines and breathing for human nature.
It is just as absurd to want to replace the current metal structure of engines or transmissions. On the other hand, intervention is always possible at this level, and that is precisely what has been done.
By isolating the metal, the metal will not be in contact with the oil or the atmosphere. To do this, we will, through the lubricant & thanks to the temperature provided by the mechanical friction, form on the surface of the metal an ultra thin & extremely resistant film which will be called the PROTECTIVE FILM because it sticks on the metal surface.
By doing so, this PROTECTIVE FILM will cover all metal surfaces that are also in contact with other metal surfaces. We will then obtain only a friction of the metal parts in motion film against film since the mechanical friction will no longer be metal against metal. The film will act like painting on a wall that would isolate it from the weather.
Second explanatory diagram with the residual film 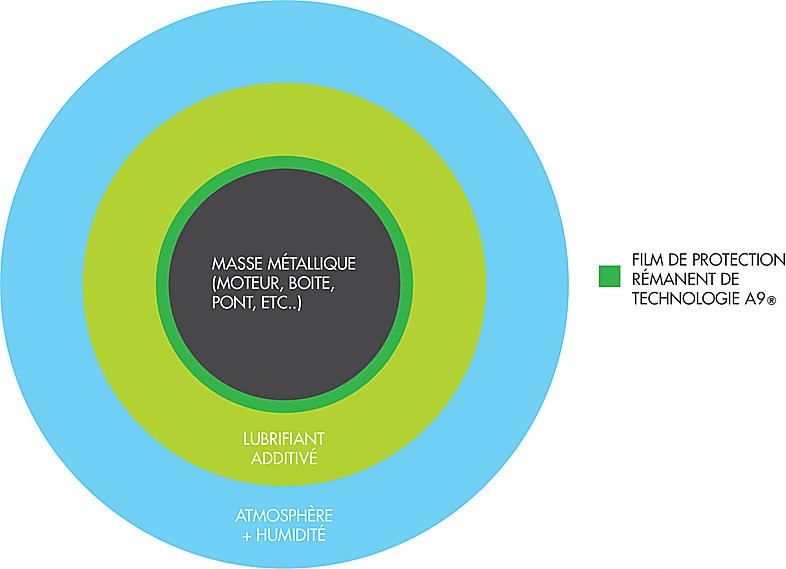 In summary the metal surface will be isolated from the oil, thus avoiding the creation of the acid reaction.
For this to be viable, the PROTECTIVE FILM must be extremely fine to avoid changing the characteristics of the metal surface. This is why the PROTECTIVE FILM generated by the A9 TECHNOLOGY® at a thickness of 0.1 μ (micron), ie 1 / 10.000 of a millimeter, which requires an electronic microscope to be observed.

Its formation is automatic as soon as the operating temperature reaches 43° Celsius.

Laying of the Protective Film
From 43° Celsius 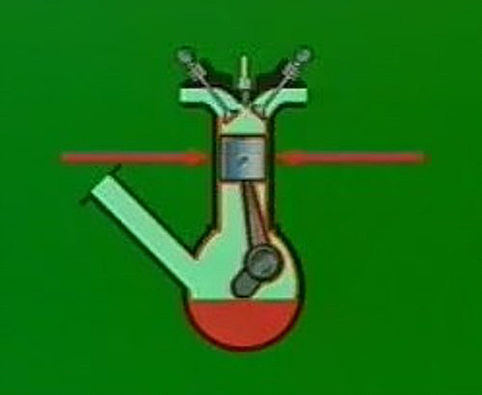 Laying of the Protective Film
From 43° Celsius
​As soon as the PROTECTIVE FILM is put in place, the acid couple can not form anymore and the cause of the deterioration disappears at the same time.
​In 1991, the first patent is deposited; A9 TECHNOLOGY® then becomes the first way to isolate a moving metal mass of its ambient medium consisting of a lubricant. This novelty will be considered by specialists in the field as the third component in the history of lubrication in modern times because TRIBOLOGY (Study of friction) will be greatly improved, on the one hand, resulting in better STŒCHIOMETRY (the study proportions according to which the bodies combine with each other) and therefore less emissions of pollutants, on the other hand.
Indeed, with the appearance of the first monograde oils (also called SAE 30, 40, or SAE 50) in the early twentieth century, then the generalization of multigrade oils in the second half of the twentieth century (that also calls 20W40, 15W40, 10W40, 5W40, etc ...), and now at the dawn of the 21st century, the generation of film-forming oils is coming onto the market. These are all lubricants that contain A9 TECHNOLOGY®Whether they are monogrades or multigrades they automatically become film-forming.
To image what has just been stated, we can say that the A9 TECHNOLOGY® is to the lubricant what the DOLBY SYSTEM® is to the acoustic reproduction organs: ESSENTIAL.